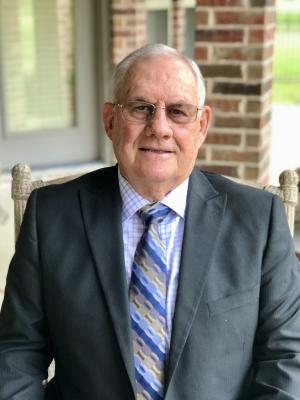 Julian Jay “Pee Wee” Miller was born in Dumas, Texas in 1945 and stayed here with his wife of more than half a century, Kay Hart Miller, until 1975.  Pee Wee was a student athlete during the golden age of Dumas athletics.  He was an integral member of the 1961 state basketball championship under Don Haskins and 1962 state basketball championship team coached by Jerry Hale. Pee Wee received the game ball from Coaches Bill Span and Burl Bartlett after successfully defending their state title in football in 1962.  Dumas became the first school in the state to win both the football and basketball state championships in a single year. In 1963, Pee Wee’s baseball team took third in the state tournament under Coach Jerry Good.

After high school, Coach Miller headed off to Panhandle State University (currently Oklahoma Panhandle State University (OPSU)) where he received scholarships in football, basketball, and baseball.  He was awarded far too many athletic awards to list here, but among the many accolades were NAIA football All American in 1965 through 1967 and most valuable basketball player in 1966-67.  Coach Miller is also proud of his Who’s Who in Colleges and University and Dean’s Honor Roll.

After college, Pee Wee came home to coach baseball and won district all five years he was in Dumas. Of those five years, Coach Miller’s Demons made the state tournament in 1970 and ‘71 and brought home the trophy in 1971.  Pee Wee leveraged his winning ways in Dumas and accepted the head baseball coaching position in Duncanville, Texas in 1973 where he implemented a culture of success.  In his second year at Duncanville (which was their first year in 4A) Coach Miller led the baseball team to a state title.  He followed up that season at Duncanville with a successfully defended state championship and two sequential state tournament appearances.  During that four year span, Pee Wee’s record was an astounding 122-22.  His success at Duncanville led to an invitation in 2016 from Governor Abbot (who was a graduate from Duncanville in 1976) to a reunion honoring the 1976 baseball state championship team.

Coach Miller’s 12 year coaching career resulted in six state tournament appearances and three state championships. Success seems to follow Pee Wee wherever he goes.  He transitioned from athletics to academics by becoming an assistant principal for four years then elementary principal for ten years. After retiring from education in 2004, Pee Wee and his wife moved to Whitney, Texas where they are still active in the community through their church and local organizations.  Coach and Mrs. Miller have made lasting impacts in every place they call home, and they are not slowing down any time soon.